You are here: Home › One Quarter Of European Airports Face Fiscal Insolvency 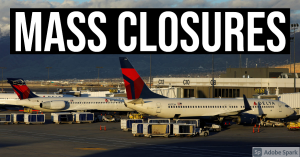 As one who has family who worked in the transportation industry, it is a very rare thing for an airport to go bankrupt, as they are considered extensions of government power and authority. Airports do not just ‘go bankrupt’, but rather are reorganized under different funding structures so to keep them viable, because it is a big deal if they are in financial trouble.

This is where I find it a highly disturbing story- and a very troubling trend signal- that the Wall Street Journal reports that one-in-four European airport face fiscal insolvency due to COVID-19 related complications.

Many European airports will struggle to stave off insolvency without state help unless travel recovers from its pandemic slump by the end of the year, according to the continent’s main industry group.

Airports Council International Europe predicts that 193 out of 740 airports in the region will soon struggle to pay their bills while government-imposed quarantine requirements remain in place, according to findings released Tuesday. The airfields in doubt are mainly smaller, regional hubs but still account for about 277,000 jobs, ACI said.

“The figures published today paint a dramatically bleak picture,” Director General Olivier Jankovec said in a statement. “Eight months into the crisis all of Europe’s airports are burning through cash to remain open, with revenues far from covering the costs of operations.”

Airlines and airports are among the companies hardest hit by the pandemic, and both industries are calling for an international testing agreement that prevents passengers from having to isolate for weeks at their destination — a factor that’s putting off many people from traveling. Such a system, which would still require passengers to provide a negative test before departure, could reopen lucrative transatlantic routes and is soon set to reconnect Hong Kong and Singapore.

“Governments’ current imposition of quarantines rather than testing is bringing Europe’s airports closer to the brink with every day that passes,” Jankovec said.
European passenger numbers fell 73% year-on-year in September, meaning the region has lost 1.29 billion travelers since January.

It cannot be said enough that the European economic crisis beginning now is HUGE.

If Europe goes under, economically speaking, she will use it to revive nationalism. This was warned about for years by EC member Bernard Connolly and son of the former National Socialist Governor of Poland Niklas Frank. Ted, Walid, and I have been trying to drive this point home at Shoebat.com likewise.

This is why I am so concerned about the economic trends- it is not just about profit or concern for the state of the US, but that the US situation is inseparable from the European situation, and when the US suffers, it will consume Europe. It is like the analogy between the Catholic Church and other Christian sects- when the Church ‘gets a cold’, all the others are a lot sicker.

The fact that airports are going under is bad, and since Europe will not likely be able to recover as before, we are not seeing just economic problems, but the rumblings of a revival of nationalism just under the surface of society.

Take note of the signs and be prepared, for the times indeed are changing…