You are here: Home › Man Screams ‘Allahu Akbar’ Over And Over As He Beheads Man In A Church, Stabs Two More To Death 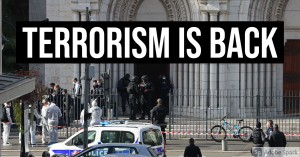 With the trends of violence and nationalism rising again in Europe, one also has seen an increase in Islamic terrorist activities in recent times. In another example of such a case, the BBC reports that a man beheaded one person in a church and stabbed two others to death while screaming “Allahu Akbar” over and over.

Three people have been killed in a knife attack at a church in the French city of Nice, police say.

Nice Mayor Christian Estrosi said there had been a “terrorist attack at the heart of the Notre-Dame basilica”.

One elderly victim who had come to pray was “virtually beheaded”. A suspect was shot and detained shortly afterwards.

President Emmanuel Macron is on his way to the scene. Anti-terror prosecutors have opened a murder inquiry and France raised its national security alert system to its highest level.

Mr Estrosi compared the attack to the recent murder of teacher Samuel Paty, who was beheaded close to his school outside Paris earlier this month.

Police have not suggested a motive for the attack in Nice. However, it follows days of protests in some Muslim-majority countries triggered by President Macron’s defence of the publication of cartoons that depicted the Prophet Mohammed. There have been calls in some countries for a boycott of French goods.

Meanwhile, two further attacks took place on Thursday morning, one in France and one in Saudi Arabia.

A man was shot dead in Montfavet near Avignon after threatening police with a handgun. And a guard was attacked outside the French consulate in Jeddah in Saudi Arabia. A suspect was arrested and the guard taken to hospital.

What is known about the attack in Nice?
Two of those who died were attacked inside the church, the elderly woman and a man who was found with his throat cut, reports said.

A woman managed to flee to a nearby cafe after being stabbed several times, but died later.

French police officers stand at the entrance of the Notre Dame Basilica church in Nice, France, 29 October 2020
IMAGE COPYRIGHTEPA
image captionThe suspect was detained minutes after the attack at the basilica
It later emerged that a witness had managed to raise the alarm with a special protection system set up by the city.

Chloe, a witness who lives near the church, told the BBC: “We heard many people shouting in the street. We saw from the window that there were many, many policemen coming, and gunshots, many gunshots.”

Tom Vannier, a journalism student who arrived at the scene just after the attack, told the BBC that people were crying on the street. (source)