You are here: Home › Azeri Troops Close In On Major Armenian Position In Nagorno-Karabakh 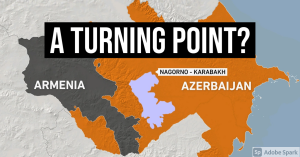 The fighting in Nagorno-Karabakh seems to be reaching a crucial point as according to TRT News, Azeri troops are closing in on a major Armenian position.

Azerbaijani troops appear a few kilometres away from the strategic town of Shusha in occupied Karabakh region.

In a statement, the Azerbaijani Ministry of Defence said the clashes took place mostly in Aghdara, Khojavand and Gubadli areas.

“The front is under Azerbaijaini army’s control,” it added.

The leader of Armenian separatists in Nagorno-Karabakh said on Thursday Azerbaijani forces were closing in on the town of Shusha, whose capture would mark a turning point after a month of fighting.

In a video recorded outside the town’s famed cathedral, separatist president Arayik Harutyunyan warned that advancing Azerbaijani forces were “five kilometres at the most” from the town.

“The enemy’s main goal is to capture Shushi … whoever controls Shushi controls Artsakh,” he said, using the Armenian names for the town and Nagorno-Karabakh.

He called on Armenians to come to the defence of the strategically important town, the second-largest in Karabakh after the main city Stepanakert.

Gaining control of Shusha would be a major victory for Azerbaijani forces, who have been making gains against Armenian separatist fighters since new fighting erupted over Nagorno-Karabakh a month ago.

The town is located on strategic heights over Stepanakert and on the road linking the city with Armenian territory.

The two sides have three times agreed to ceasefires – the latest in a US-brokered deal at the weekend – but the truces have all quickly fallen apart.

The fighting has intensified in recent days, including with renewed shelling and rocket attacks on civilian areas.

Karabakh’s rights ombudsman Artak Beglaryan told AFP earlier on Thursday that Azerbaijan had launched some of its heaviest strikes yet.

The strikes came after Azerbaijan accused Armenian forces of killing 21 people and wounding dozens in a missile strike on the town of Barda on Wednesday.

More than 1,200 people from both sides have been reported dead since the fighting began, including over 130 civilians, and thousands forced from their homes. (source)