You are here: Home › The Bidens Are In Serious Trouble 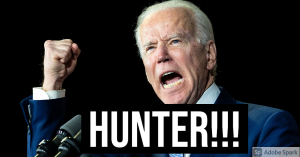 This past October has yielded quite the number of surprises. Robert Hunter Biden, son of Joe Biden, has found himself in a lot of trouble following an incident with a laptop in which confirmed evidence, unconfirmed evidence, and unconfirmed statements made by various anonymous sources have created a picture of a man that is quite revealing, in all senses of the word. But of all that which has been exposed, and indeed, much has been, the most interesting is a series of email detaling what seem to be openly illegal business transactions between the elder Biden and foreign governments with Hunter as the intermediary on behalf of his father.

The story, which first broke on the NY Post, attracted national attention and according to the Daily Caller, another development in the stpry has emerged as the findings seem to have been confirmed by forensic evidence.

An email Hunter Biden received in April 2015 from a Burisma executive discussing an introduction to then-Vice President Joe Biden, which lies at the heart of a New York Post investigation, is unquestionably authentic, a cybersecurity expert told the Daily Caller News Foundation on Thursday.

The DCNF obtained a full copy of Hunter Biden’s alleged laptop from former New York Mayor Rudy Giuliani on Wednesday. The DCNF provided Robert Graham, the founder of the cybersecurity firm Errata Security, with a copy of the email and its metadata for forensic analysis.

Graham, who has been cited as a cybersecurity expert in The Washington Post, the Associated Press, Wired, Engadget and other news and technology outlets, told the DCNF that he used a cryptographic signature found in the email’s metadata to validate that Vadym Pozharsky, an advisor to Burisma’s board of directors, emailed Hunter Biden on April 17, 2015.

In the email, Pozharsky thanked Hunter Biden for “inviting me to DC and giving an opportunity to meet your father and spent [sic] some time together.”

The New York Post first reported the email in October, describing it as a “smoking-gun” showing that Hunter Biden had introduced his father to the Burisma executive in 2015.

The email was sent less than a year before Joe Biden pressured former Ukrainian President Petro Poroshenko to fire a prosecutor who was reportedly investigating the gas company in return for a $1 billion loan guarantee.

Graham previously told the DCNF that emails sent from Gmail, such as Pozharski’s message to Hunter Biden, can be “absolutely verified beyond a shadow of a doubt” by testing its contents against the unique DKIM signature found in its metadata.

Graham used the DKIM signature within the email to verify with a private key on Google’s servers that the sender, recipient, subject, date and body of the message that the DCNF obtained from Giuliani were unchanged from when the email was originally sent in April 2015. (RELATED: Hunter Biden Emails Could Be ‘Absolutely Verified’ If Rudy Giuliani Released The Metadata, Expert Says)

Graham said the only way the email could have been faked is if someone hacked into Google’s servers, found the private key and used it to reverse engineer the email’s DKIM signature.

Email metadata on its own does not provide any indication of whether hacking had anything to with the email’s release, Graham noted.

It is so serious that U.S. Senate Committee on Homeland Security and Governmental Affairs has put out an official report on the matter.

This email may serve to be a death sentence for the Biden campaign, not just for voter interest (which is still to Trump’s favor in spite of the media clamoring), but that it may result in criminal charges being put against Hunter or Joe himself.

What happens from now until election day is going to be very interesting and important to watch, for even Trump’s reality TV show series at its height could not reach the levels of interest and intrigue that this current election year has been able to accomplish.